[introduction to the collection]: the "Mountain Ghost spending money" was created in the late Qing Dynasty to ward off evil spirits. Its front is in regular script: Mountain Ghost, thunder kills ghosts, subdues demons, cuts demons and ward off evil spirits, and always protects the talisman. It is presented to the supreme Lord as urgent as a decree. It first appeared in the Warring States period of China. There are many kinds of "mountain ghosts". People say that mountain ghosts are one legged spirits. In the Ming Dynasty, many literary and historical scholars believe that mountain ghosts are mountain gods. 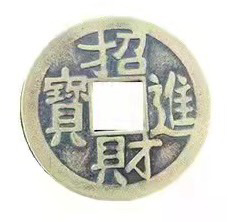 This is a treasure mountain ghost spending money in the Qing Dynasty. On the front is the mantra of "thunder, thunder, kill ghosts and reduce essence, cut demons and ward off evil spirits, and always keep the God clear. It is in the hurry of the Supreme Lord, such as laws and decrees. Thunder orders mountain ghosts", and on the back is the four words "attract wealth and treasure" in regular script. This coin is exquisitely made, with clear words and unique shape. It is actually a high-quality product in spending money. 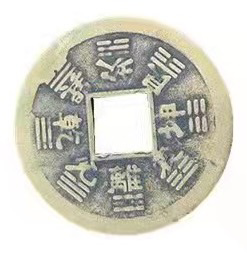 On the back of the Mountain Ghost decoration is the word "attract wealth and treasure", which expresses the good wishes of ancient people to place good luck, eliminate evil and avoid evil, and the beautiful pursuit of a happy life.